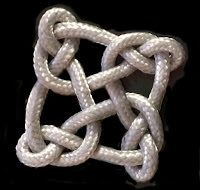 The universe seems to be moving forwards, ever forwards, and there's nothing we can do about it. Or is there? Is the world too tangled to unravel?

We all see the changes in the world. Climate change is the new catchphrase for global warming. Some areas of the world may never sort themselves out: the Koreas, the Middle East, Africa. Yet we can look to the past and see how a divided Germany re-unified, how South Africa eliminated the apartheid government and changed for the better (bless you Nelson Mandela, and may you rest in peace), how Europe has bonded with common currency and economic control.

Good and bad: will Europe solidify or become an economic roller coaster? Will Africa stabilize or continue on its path of tribal and religious genocide? Will Iran become a good neighbor, or will it simply arm itself with nuclear weapons and force a confrontation with Israel?

Despotic secular regimes have been overthrown in the Islamic world (Egypt, Tunisia, and Libya) and social media seems to have become a trigger for change, a tool for inciting revolution. Some regimes are experiencing slight Islamic shifts, like Turkey. But Egypt, having moved in that direction when the Islamic Brotherhood secured the presidency, is now moving away from it in yet another revolution.

The more things change, the more they stay the same.

The reason that social media became an enabler for the changes we are seeing is because people care. Crowdsourced opinion has an increasing amount of effect on government. Imagine that! Democracy in action. Even in countries that have yet to see democracy.

Let's look at one of the biggest enablers for this: the iPhone.

The iPhone and its effect

Yes, this is one of the biggest vehicles for change because it raised the bar on handheld social media, on internet in your pocket, and on the spread of digital photography. The ability to make a difference was propagated with the iPhone and the devices that copied it. Did Steve Jobs know he was starting this kind of change? He knew it was transformative. And he built ecosystems like iTunes, the App store, and the iBookstore to make it all work. Without the App Store, we'd all still be in the dark ages of social media. The mobile revolution is here to stay.

Holding the first iPhone was like holding a bit of the future in your hands. It was that far ahead of the pack. Its amazing glass keyboard was met with skepticism from analysts at first, but the public was quick to decide it was just fine for them. A phone that was just a huge glass screen was more than an innovation. It was a revolution.

It's even remarkable that Steve Ballmer panned the first iPhone when it came out. By doing that, he drew even more attention to the gamble Apple was making, and in retrospect made himself look amazingly short-sighted. And look where it got him! Microsoft's lack of success in the mobile industry seems predictable, once you see this.

Each new iPhone iteration brings remarkable value. Better telephony (3G quickly became 4G and that quickly became LTE), better sensors (accelerometer, GPS, magnetometer, gyrometer, etc.), and better camera, lenses, flashes, and BSI sensors. Bluetooth connectivity makes it work in our cars. Siri makes it work by voice command. Each new feature is so well-integrated that it just feels like it's been there all along. Now that I have used my iPhone 5S for awhile, I feel like the fingerprint sensor is part of what an iPhone means, now.

This all-in-one device has led to unprecedented spread of pictures. It and its (ahem, copycat) devices supporting Google's Android and more recently Microsoft's Windows Phone 8 have enabled social media to become ever more present, and influential, in our world.

In 2012, a Nielsen report showed that social media growth is driven largely by mobile devices and the mobile apps made by the social media sites.

A battle is being fought in the field of security.

Private hackers have been stealing identities and doing so much more to gain attention, and we know why.

Then hackers began attacking companies and countries, plying their expertise, for various causes. The Anonymous and LulzSec groups fought Sony against the restrictiveness of gaming systems, against the despotic regime in Iran, against banks they believed were evil.

Then the nation state hacking organizations began to do their worst. With targeted viruses like Flame, Stuxnet, and Duqu. Whole military organizations are built, like China's military unit 61398 with the sole task of hacking foreign businesses and governments.

It is very much a sign of the times that the latest iPhone 5S features Touch ID. You just need your fingerprint to unlock it. Biometrics like fingerprints and iris scans (something only you are) are becoming a good method for security engineering. There are so many public hacker attacks that individual security is quickly becoming a major problem.

New techniques for securing your data, like multi-factor authentication, are becoming increasingly both popular and necessary. Accessing your bank and making a money transfer? Enter the passcode for your account (something only you know), then they send your trusted phone (something only you have) a text message and you enter it into the box. The second factor makes it more secure because it is more certain to be you and not some interloper spoofing you.

The landscape of security has been forever changed by the whistleblowers. Whole organizations were built to support them (WikiLeaks) and governments, banks, and corporations were targeted. The release of huge sets included confidential data from the US Military, from the Church of Scientology, from the Swiss Bank Julius Baer, from the Congressional Research Service, and from the NSA, via Edward Snowden.

It is notable that WikiLeaks hasn't released secret information from Russia or China. It is most likely that they would be collectively assassinated were that the case. Especially given such events as the death of Alexander Litvinenko.

The founder of WikiLeaks, Julian Assange, is currently a self-imposed captive in the Ecuadorean embassy in London. In an apparent coup, one of the WikiLeaks members, Daniel Domscheit-Berg decided to leave WikiLeaks, and when he left, he destroyed documents containing America's no-fly list, the collected emails of the Bank of America, insider information from 20 right-wing organizations, and proof of torture in an undisclosed Latin American country (unlikely to be Ecuador, and much more likely to be one of its adversaries, such as Colombia). Domscheit-Berg apparently left to start up his own leaks site, but later decided to merely offer information on how to set one up.

The trend is that the general public (or at least a few highly-vocal people) increasingly expect all secrets to be revealed. And yet, I expect that they would highly value their own secrets. This is why there is such a trend towards protecting individual privacy.

The reality is organizations like WikiLeaks are proud to reveal secrets from the western democracies like America, but are reticent to do so for America's adversaries like Russia. Since this creates an asymmetric advantage, these organizations can only be viewed as anti-American. Even if they aren't specifically anti-American, they inevitably have this effect.

So they are playing for the Russians whether they believe it or not.

Does the whistleblower movement have the inherent potential for disentangling the world political situation? Perhaps in the sense that knots can be cut, like the Gordian Knot. But disentangled? No.

The only way that the knots can be unraveled is if everybody begins to play nice. And I don't really see that happening.

Perhaps Raul Castro will embrace America as an ally now that we have shaken hands. Perhaps Iran will stop its relentless bunker-protected quest for Uranium enrichment. Perhaps the Islamic militias in Africa will declare a policy of live-and-let-live with their Christian neighbors and stop the wholesale slaughter.

Only we can stop the unstoppable now.