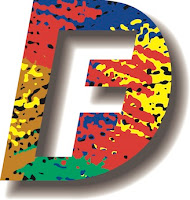 There was a formula for creating great software at Fractal Design, where we created Painter. And it was built into our every employee. As friends, we shared the load. We all had our specializations. We collaborated. We argued, and forgave. We had a band, and performed sometimes at company summer parties. Like a family, we watched each other get married, have kids, go through tough times, and we cared.

Our products tended to sell themselves because they served a real purpose: to enable artists to do more. We captured the nuance of human expression and faithfully reproduced it, allowing the artists' style to come through.

And Painter, now advanced by Corel, still does that wonderfully.

To build our products, we had the gang of 3: Tom Hedges, John Derry, and myself. We always worked in the same room. So our offices tended to be a bit strange. We might have been the nexus of development, but there were many others who put their hearts to the task. We had a formidable QA department headed by Michael Cinque, who came to us from Letraset; he worked with ColorStudio in the early days, Tom recruited him, and he came out west to join the Fractal team. QA people like Steve Rathmann, Stanley Veale, Steve Yatson, Joe Grover, Adam Croston, and others helped us perfect our products.

The gang of 3 were patiently overseen by our admins a: Kim Hinrichsen (now Kim Kern) and later Karen Carpenter (now Karen Cooper).

Our engineering always made me proud. Priscilla Shih (now Priscilla Cinque), Shelby Moore, Bob Lansdon, Glenn Reid, Christy Hall (now Christy Brandt), Vahe Avedissian, Scott Cooper, Matthew Kaufman, Qaren Van Brink, and Erik Johnson worked on the Painter family of products. In 1996, Fractal Design merged with Ray Dream, and this brought with it a fantastic staff of engineers like Pierre Berkaloff (who ran our combined R&D), Pascal Belloncle, Nicholas Barry, Emil Valkov, Damien Saint Macary, and Alexandre Clappier. Ian Sullivan was a framework guy, and I totally respected his work. He always kept up with demand and that couldn't have been easy! The Ray Dream engineers helped our engineering move forwards because their systems work clearly matched our own in sophistication. Larry Weinberg, the Poser author, was clearly in a class by himself. It put a totally new aspect to human expression into our products. Seath Ahrens became part of the Poser team in the late 90s.

Tom Hedges was always a great engineer. Between Tom and me, we had several advantages. His systems work got us so far, with innovations like tiled virtual image memory, plug-in capabilities, and scanner drivers. There wasn't a problem that Tom couldn't figure out.

Tom was the consummate finisher and polisher. He was the best debugger I have ever met, a true genius. And honesty was his policy always.

Sometimes Tom and I would get into an argument over how to do something, and we could really yell! But we always worked it out the next day. It was worrisome to the others at Fractal, but eventually they came to know it as "our way".

Our manuals were the best in the business and were prime examples of quality work. They were, almost without exception, full color and featured the work of many talented artists. The early manuals were designed by Steve Manousos and written by Karen Sperling. They certainly set the standard for graphics manuals in the early days of color Macintosh and Windows applications. But the floridly illustrated and well-organized Painter 3, 4, 5, and 6 manuals were designed, organized, and edited by Mary Mathis-Meltzer (now Mary Zimmer), who we affectionately called M3. Mary also managed a crew of writers and designers using these years, a herculean task to say the least. All supported by our IT guy, Tom Tilmant. The artwork for the manuals came from a stable of artists managed partly by Mary and partly by our PR person, Daryl Wise. On-staff artists and designers like Rich O'Reilly, Arena Reed, Brent Houston, Aaron Begley, and Brian Moose kept our looks fresh. And Rafael Rodriguez coordinated quite a bit as a Project Manager. By the way, Daryl was also responsible for all the large Fractal Design events, such as the Winter of Love concerts we held at the Fillmore during January MacWorld shows in the 90s. This was because he actually once worked with Bill Graham Presents.

Later, after the Meta merger, Sallie Olmstead ran our PR.

Like I said, we all had our specializations. And each of us did the work of many people.

Our sales and marketing team was also quite talented, and they were quite active. Steve Manousos managed sales at Fractal and Fred Brown managed sales quite a bit later when we were MetaCreations. Working for Steve, we had Karen Bria, Mike Popolo, Jennifer Andrew, Cori Garnero (now Cori Tuck), Dawn Hannah (now Dawn Bercow), and Katherine Howard (now Katherine Kehl). And Tad Shelby, who was quite capable, sometimes had issues with his bright red hair in Japan. Today he has shaved it all off, and I like the look!

Our international team was more often than not supported by those people who, without their constant help, we would have been utterly lost. I'm thinking of Gilles Lyonnet and Claude Swimer in France. Their endless enthusiasm, effort, and help will always be appreciated. And french artists Jean-Luc Touillon and Sibertin-Blanc Pascal seemed to keep support flowing.

As Fractal got larger, we recruited talent like our well-qualified and diligent CFO, Les Wright and our product managers Steve Guttman, Jon Bass, Lora Williams, Sandra Knox (now Sandra Heuckroth), Steve Cooper (the Poser product manager), and the impressive John Leddy. Our product managers were talented, organized, and they also put up with a lot from the engineers. Our operations guy, John Hartnett is one of the most professional people I have ever met. I'm sure he still is! And it seems I was constantly impressed by Cian Hughes. Our irish operations team were always top notch, period!

Down south in Hollywood, we had Dan DiPaola, who ran the office there and managed our representation with the studios and power service bureaus that make up the industries. He was famous for having the most powerful machines on the block. He introduced John and I to more artistic talent than I probably deserved. Like Dan Clark (who is responsible for many movie posters), Lee Varis, and so many others. Other friends like Tony Redhead at Electric Paint kept us in the know and made us aware of what it really took to create high-quality artwork for the studios.

While we thought that the Ray Dream merger was quite a complex and turbulent task, it actually went swimmingly. This was in comparison to the merger with MetaTools, when MetaCreations was born. 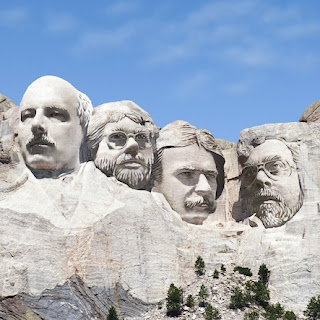 But from MetaTools came another set of talented engineers and product managers. Engineers like Ben Weiss (the smartest guy I know), Sree Kotay, Michael Herf, Ales Holecek, Moe Doucet, Javier Roca, and Scott Fegette. And designers like Kai Gradert and Phil Clevenger, whose command of UI is legendary now at Adobe. And, of course the wildly creative Kai Krause. Responsible for epic products like KPT, Kai's Power Goo, and Bryce, they really set a very high quality bar for their software. They always wanted the experience of using their software to be the greatest of all. And they succeeded.

For Painter 5, our theme A Monument to Creativity led me to construct Mount Brushmore for the Painter poster. Here you see Tom Hedges, John Derry, Kai Krause, and myself carved out of the stone of a mountain.

OK it was kind of corny! But we did have fun in those days. In a future post, I'll tell you more about how this piece was constructed.

MetaTools had an office in Princeton that did work that was destined to be a web-centric way of communicating images and 3D data. At some point, the Meta board of directors decided that the web was the future and then they wanted to sell off the software. I was recruited once more as CEO to do that. And that was that for our packaged software business.

I guess I will always look fondly upon the Fractal Design and MetaCreations years as some of the most creative years of my life. And I will always be proud of the formula that made it all work: the people.

I can't really remember all the people that worked at our company, but, when I do, I'll probably add them to this post. It was a unique place and time
Posted by Mark at 12:55 AM